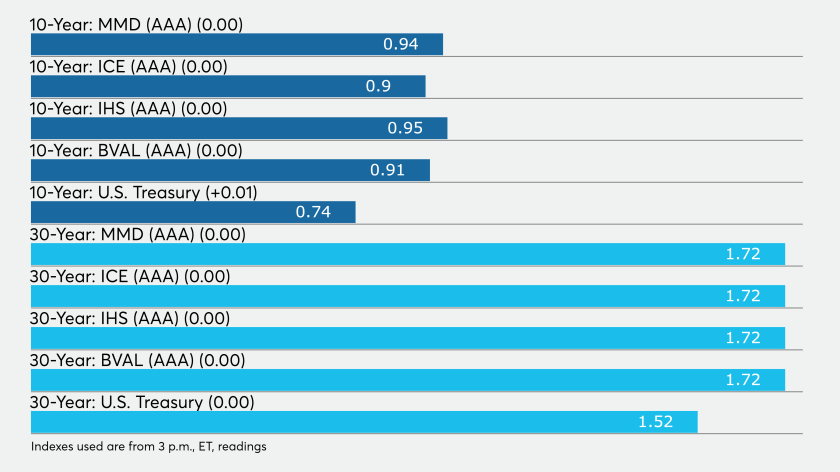 The new-issue calendar is stuffed with all types of healthcare deals and taxable offerings, inflating its size up to almost $16.5 billion, once again the largest supply slate of 2020.

Healthcare deals and taxable sales feature prominently on the list of new deals, but offerings from the states of California, Hawaii, Illinois as well as tobacco bonds round out the slate along with some big competitive issues.

In secondary trading, municipals were little changed Friday, with yields on the AAA scales remaining mostly steady ahead of the upcoming supply surge. On the week, muni yields were only about one basis point lower.

“A lot of the week’s deals were higher-yielding — taxables, healthcare, transportation, aviation — names, which went off well,” a New York trader said. “It will remain to be seen how much the market can take on some big investment grade GO deals, presumably that issuers were holding off selling but now they can’t avoid the rate environment and upcoming election uncertainty. Better to get the deals done now, but we could see a bit of a back-up in rates with such a large amount of paper, including GO names, flooding the market.”

Primary market
IHS Ipreo estimates volume for the upcoming week at $16.4 billion. The calendar is composed of $10.5 billion of negotiated deals and $5.9 billion of competitive sales. Refinitiv estimates the total to consist of $11.2 billion of tax-exempts and $5.2 billion taxables.

Close behind is Illinois’ CommonSpirit Health (Baa1/BBB+/BBB+/NR) which is coming with a $1.5 billion offering of Series 2020 taxable corporate CUSIP bonds under its own name as the California Health Facilities Financing Authority issues $631.36 million of Series 2020A tax-exempt revenue bonds for the healthcare group.

Morgan Stanley is expected to price both deals on Wednesday.

Also Banner Health of Arizona (NR/AA-/AA-/NR) is coming to market with $607.655 million of Series 2020C taxable corporate CUSIP bonds. Morgan Stanley is set to price the bonds on Tuesday.

Other large deals of note include the Alabama Public School and College Authority’s (aa1/AA/AA+/) $1.48 billion of capital improvement and refunding bonds consisting of Series 2020A tax-exempts Series 202B taxables and Series 2020C taxables.

Wells Fargo Securities is set to price the deal on Thursday.

BofA Securities is expected to price the deal on Wednesday.

Citigroup is expected to price the deal on Wednesday.

In the competitive arena, the state of California is selling $1.1 billion of various purpose general obligation bonds in three offerings on Thursday.

The state of Illinois is coming to market on Tuesday with $850 million of GOs in four offerings.

One deal that won’t be coming, according to Bloomberg, is Fortress Investment Group’s $3.2 billion sale of municipal bonds to build a passenger railroad between southern California and Las Vegas. The deal had been planned for Wednesday, but has now been postponed and is listed as day-to-day.

The upcoming week is certainly the highest volume of issuance since the onset of the pandemic, said MMD Refinitiv senior market strategist Daniel Berger, who added that there are six state issuers selling debt.

“Has the muni market run out of steam? Muni appetite may be waning as muni fund flows which had a great week in early October were lower this week,” he said.

However, he said the last quarter is typically when new-issue muni volume increases.

“In addition, it is worth considering that the pandemic which earlier led to an unprecedented level of volatility may be driving some issuers to continue to sell more bonds until there is more clarity about the fiscal relief package and its impact upon municipal issuers,” he said. “The difference [for the new week] is that more issuers of higher credit and a bigger profile have paid attention to their debt needs.”

The most active bond types traded this week were revenue bonds, followed by GOs and taxable, according to IHS Markit said.

“Municipal bonds are ending the week mixed,” ICE Data Services said. “Yields on the ICE muni curve are up in the front end by as much as a basis point. The back end is little changed.”

Bond Buyer indexes mixed
The weekly average yield to maturity of the Bond Buyer Municipal Bond Index, which is based on 40 long-term bond prices, rose two basis points to 3.62% from 3.60% in the previous week.

The Bond Buyer’s 20-bond GO Index of 20-year general obligation yields was unchanged at 2.35% from the previous week.