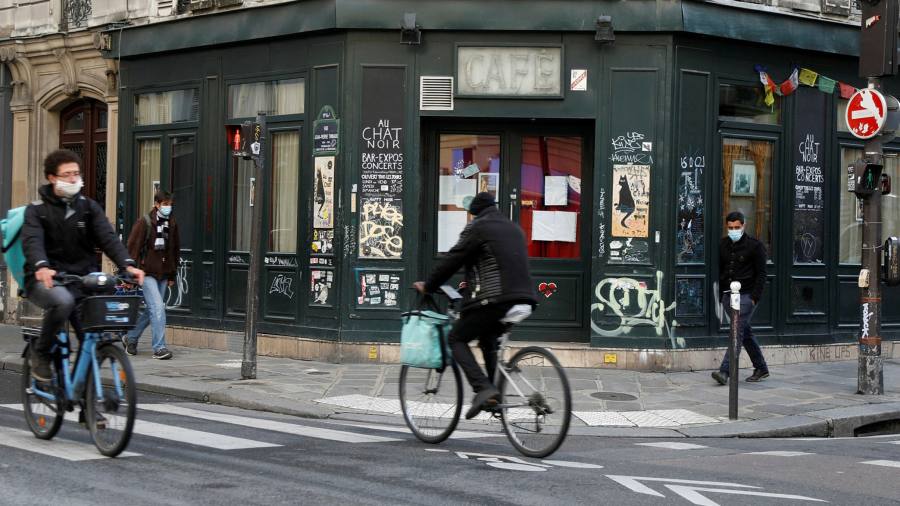 European stocks and Wall Street futures dropped on signs that coronavirus is gathering pace, while a rally in German debt pushed yields on the regional haven to the lowest level since the market tumult in March.

The gloomy trading day came after several countries including France and the UK announced new restrictions in an attempt to slow the spread of the virus, which is accelerating across the continent.

By lunchtime in Europe, the region-wide Stoxx 600 fell 2.1 per cent and Frankfurt’s Xetra Dax was down 2.7 per cent.

The moves put both indices on course for their worst day since September 21, the last time European markets were shaken by pandemic fears and renewed social curbs. London’s FTSE 100 index fell 1.8 per cent.

Futures contracts betting on the direction of the S&P 500 fell 1 per cent while those on the top 100 stocks in the Nasdaq lost 1.3 per cent. The US reported nearly 57,000 new cases on Wednesday as a record number of states reported daily increases of more than 1,000 new infections.

Investors in Europe should now brace themselves for “a few weeks of volatility”, said Sophie Chardon, cross-asset strategist at Lombard Odier.

The VStoxx index of expected volatility in eurozone blue-chips rose 3 points on Thursday to 26.2 points, its highest reading in almost two weeks, although not much above its long-term average of around 24. A similar index tracking Wall Street volatility also rose on Thursday.

On Wednesday evening, French president Emmanuel Macron declared a public health emergency and imposed a 9pm to 6am curfew on Paris and eight other major French cities.

German chancellor Angela Merkel warned cases of the virus were in an “exponential growth” phase and limited private gatherings to 10 people from two households. In Britain, households in London will be banned from mixing inside from Friday evening.

Shares in businesses that rely on economic growth and people having the freedom to socialise were the worst performers. The Stoxx 600’s energy sector dropped 2.8 per cent and consumer cyclicals fell 2.3 per cent.

That reversed positive moves in these sectors last week, when some investors sought bargains ahead of economies reopening.

The yield on Germany’s 10-year Bunds fell 0.05 percentage points to minus 0.624 per cent. That was the lowest level since the second week of March, when Italy announced a nationwide lockdown and also the strongest weekly rally for the securities since mid-June.

The 10-year US Treasury yield fell 0.02 percentage points to 0.7 per cent as investors bought the debt.

“Markets have been surprised by the progress of the virus in the second wave,” said John Roe, strategist at Legal & General Investment Management.

He said economists and investors had not expected governments to allow the virus to reach the point it has now, where “hospital ICUs are in danger of overflowing.” Across the western world, governments had prioritised social wellbeing, for example by allowing schools and places of worship to reopen, he said. “Investors underestimated how much politicians would look at that.”