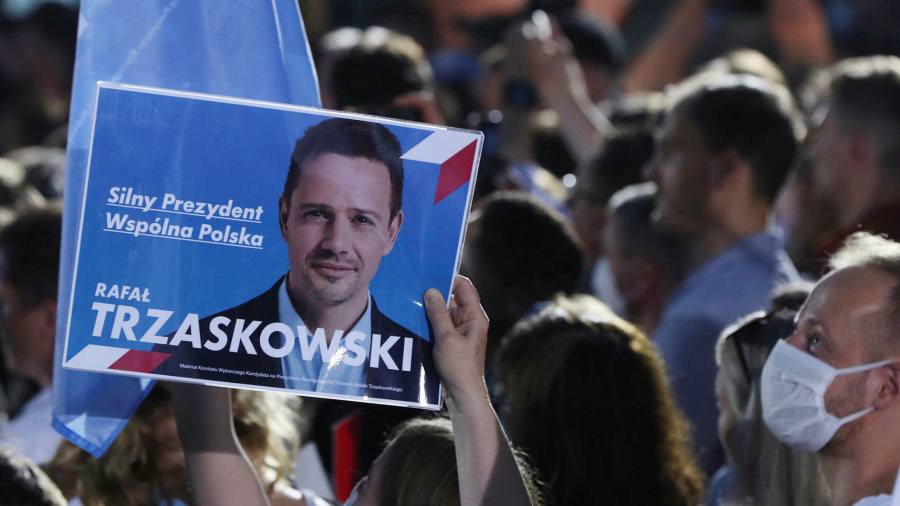 Andrzej Duda is on course to win the first round of Poland’s presidential election, paving the way for what is likely to be a bitterly contested run-off against his centrist rival Rafal Trzaskowski.

Incumbent Mr Duda, running for a second term and backed by Poland’s conservative-nationalist Law and Justice party (PiS), was set to win 41.8 per cent of the vote, according to an exit poll on Sunday night for Poland’s three main television channels.

Mr Trzaskowski, from Poland’s main opposition grouping, Civic Coalition, was on course to do best of the remaining 10 candidates, with 30.4 per cent. If the exit poll is correct, he and Mr Duda will face a winner-takes-all run-off on July 12. An opinion survey on Sunday night put Mr Duda’s second round lead over Mr Trzaskowski at less than one percentage point.

Mr Duda hailed his exit poll numbers as a sign of how his support had grown over his five years in office, despite the pressures of incumbency.

“After five years, I have gained [votes] despite pursuing policies the whole time, despite being criticised and attacked, despite taking difficult decisions,” he said. “After five years, far more people have voted for me than did back then.”

However, Mr Trzaskowski, who entered the race just six weeks ago, after the coronavirus pandemic forced the vote to be postponed from its original date of May 10, said the exit poll showed that he was in a position to “fight for Poland”.

“This result shows one thing . . . namely, that more than 58 per cent of people want change,” he said. “And I want to say to all those citizens clearly today: I will be your candidate, I will be the candidate of change.”

Both sides of Poland’s bitter partisan divide have billed this year’s election as a potential watershed for the central European nation, which has clashed with Brussels on everything from the rule of law to the environment since PiS came to power five years ago.

A win for Mr Duda would give PiS three years without further elections to continue with its legislative agenda. Victory for Mr Trzaskowski would give the opposition control over the presidency’s veto powers and mean that it would be able to exercise a check on PiS for the first time since 2015.

Despite various health restrictions put in place at polling stations to contain coronavirus, Poles turned out to vote in huge numbers. At 5pm, four hours before polls closed, the turnout was 47.89 per cent, almost as high as the 48.96 per cent registered overall in 2015.

Mr Duda — a one-time legal aide to Lech Kaczynski, who founded PiS with his twin Jaroslaw in 2001 — began the campaign seeking to position himself as a guarantor of the party’s popular welfare programmes, which have improved the lot of many poorer Poles over the past five years.

“He was the first one to think about pensioners,” said Irena, a pensioner who voted for Mr Duda in the Warsaw district of Targowek. “The tangible proof is that now we live better.”

However, as his once-commanding lead in opinion polls dwindled in the wake of Mr Trzaskowski’s entry into the race, Mr Duda also stepped up his attacks on what he calls LGBT “ideology” in an effort to rally conservative voters and portray Mr Trzaskowski, who has been supportive of LGBT rights, as a threat to traditional Polish values.

Mr Trzaskowski, the multilingual son of a jazz musician who served as Europe minister in the centre-right government of Donald Tusk, has largely avoided being drawn into battles on cultural issues. Instead, he has sought to rally voters with promises of local investments, improved relations with the EU, and promises to provide a check on PiS.

“He is young, well-educated. He doesn’t embarrass us,” said Anna, who voted for Mr Trzaskowski along with her sister Zuzanna in Targowek. “He thinks normally, he thinks in a European way or even in a global way.”

Ben Stanley, associate professor at SWPS University in Warsaw, said that Mr Duda remained the “slight favourite” due the benefits of incumbency and the relentless support of the public media. But he cautioned that if the economic situation in Poland began to deteriorate in Poland as a result of the coronavirus pandemic, this could work against him.

“People are not yet really experiencing it on their own flesh,” he said. “But [if there are increased lay-offs] it might be problematic for Duda.”